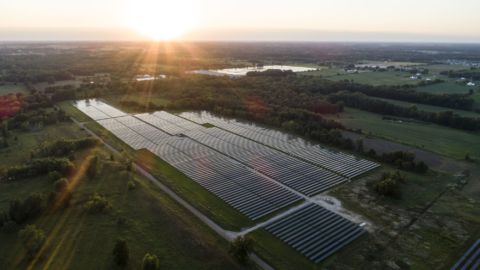 The Delta Solar Project is a 24 MW (AC) single-axis tracking system capable of generating approximately 44,200 MW hours of electricity each year. The project was developed, designed, and constructed by EDF Renewables and is currently generating electricity for the Lansing Board of Water and Light (MI), a municipal utility serving the greater Capital Region. The project is owned by an affiliate CMS Energy, a Michigan based energy company and was constructed utilizing Michigan based subcontractors. At the time of its completion, the project was the largest single-axis tracker and third party owned solar project in the State of Michigan.

The Delta Solar Project features three co-located arrays that interconnect to two 13.8 kV express feeder circuits sharing common poles. Power flows from these arrays to the Lansing Board of Water and Light’s Canal Road Substation where it is then distributed to homes, farms, and businesses served by the municipal utility. The project supplies enough renewable energy to power over 4,200 homes and is a significant contributor to the municipal utilities renewable goals. Delta Solar features NEXTracker single-axis self-powered tracking systems, 86,400 solar modules (both 335 and 340 W) manufactured by REC and Trina Solar, and 400 Solectria 60 kW string inverters.